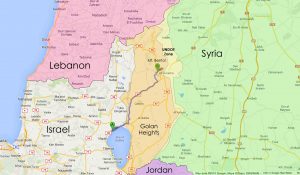 Iran fired half-a-dozen ballistic missiles from domestic bases that hit Islamic State targets deep in Syria.  The reason given was to avenge the Islamic State’s recent suicide attacks on the Iranian Parliament.

Israel is right next door to Syria.  And for decades, Teheran’s ruling mullahs have been saying they

intend to exterminate the Jews.  So Tel Aviv is feeling the heat.

Lest anyone miss the point, Iran’s foreign ministry issued a statement saying these launches were a message to Israel, America, and the Saudis.

To our knowledge, this was the first-ever battlefield test of an intermediate-range ballistic missile (IRBM) in the Mideast.

These missiles take just minutes to hit their targets.  So it’s hard to over-estimate how alarming a development this truly is.

The global media practically goes into paroxysms of alarm over North Korea’s IRBM tests — none of which have actually ever hit a target.

Some of them blew up on the launchpad, so nobody knows how close Kim’s IRBMs are from actually being operational.

Not so for Iran — which has now successfully demonstrated its ability to annihilate military targets in Israel and Saudi Arabia with missiles fired from inside its territory.

Make no mistake, Iran can now devastate Saudi Arabia’s oil fields and all of Israel’s cities with the push of a button.

Look at the following timeline from the past three months and realize that in the previous six years of the Syrian civil war, there was not one instance of direct fighting between the U.S. and Iranian proxies. Now, they clash almost daily.

April 4: Syrian President Bashar Assad launched a devastating chemical attack against his own people.
April 6: U.S. President Donald Trump responded by firing 59 Tomahawk cruise missiles from the Mediterranean against the Syrian airfield, which marked the first time the U.S. had directly targeted the Assad regime in the Syrian civil war.
May 18: A group from the Sayyid al-Shuhada Brigade, an Iranian-supported militia, approached the American al-Tanf military base on the border between Syria, Iraq and Jordan and, subsequently, was destroyed by aircraft.
May 29: Iraq’s Popular Mobilization Units, a massive fighting force of mainly Iranian-backed militias, reached the Syrian border from Iraqi territory for the first time. Pictures were widely circulated in Iranian and Syrian media.
June 6: An Iranian-backed militia advanced on the “deconfliction” zone in southern Syria. After repeated warnings to halt, U.S. aircraft destroyed the column of vehicles, including two artillery pieces, an antiaircraft weapon and a tank.
June 8: An Iranian drone dropped a munition on U.S. coalition forces near al-Tanf, but it failed to detonate. The U.S. shot down the drone.
June 12: Iranian state media released photographs of Islamic Revolutionary Guard Corps Quds Force Cmdr. Qassem Suleimani standing on the Iraqi-Syrian border alongside an Iranian-backed militia, culminating a lightning offensive across eastern Syria to reach the border.
June 14: The U.S. moved its mobile artillery rocket launchers into southern Syria for the first time in order to provide a 300-kilometer (186-mile) security umbrella for its troops along the border.
June 18: The U.S. shot down a Syrian jet for bombing its allies in the most significant ratcheting up of tensions to date.
June 18: Iran’s revolutionary guard launched six ballistic missiles toward Syria, travelling 370 miles and receiving permission to fly over Iraqi territory. Gen. Ramazan Sharif told state media that “the Saudis and Americans are especially receivers of the message.”
Obviously, this situation in Syria is highly combustible, especially considering that each side does not want to back down. As Mahan Abedin correctly noted in Middle East Monitor on June 6, a clash is “inevitable.” He wrote: